Examining the Neighborhood-Level Housing Impact of COVID-19 in Chicago: A Preliminary Analysis

This blog introduces a new preliminary IHS analysis that explores trends and geographic patterns of workers more at-risk during the first wave of COVID-related mass layoffs. Above, select Chicago submarkets and the number of likely-impacted and less likely-impacted renter households.

Over a month into the COVID-19 pandemic in the United States, the full impact of the crisis on local housing markets and housing security is not yet known. So far, policy interventions have largely been focused on short-term efforts to stabilize individual households through financial assistance, mortgage, and student loan forbearance, and expanded unemployment insurance, but policymakers and advocates are already eyeing mid- to long-term interventions including an expansion of Housing Choice Vouchers, mortgage modification programs, and investments in affordable housing preservation.

While there is still a lot of uncertainty as to the size and scope of COVID-19’s economic impact, there are growing indications that the crisis will have a disproportionate impact on certain individuals and families. For example, local and national data show that black Americans are dying from COVID-19 at higher rates, seniors are more at risk for serious illness, and low-wage workers are more likely to be employed in industries most impacted by stay-at-home orders.

Given the stark ways in which these demographic and socioeconomic characteristics manifest geographically in Chicago, it’s likely that there will also be a disproportionate geographic impact of the crisis as well. Recently, in response to the disproportionately high number of black Chicagoans impacted by severe COVID-19 illness, Chicago Mayor Lori Lightfoot convened a rapid-response team tasked with addressing and improving these health outcomes at the neighborhood level.

For many housing and community development stakeholders in Chicago, it’s not surprising that COVID-19 will have an outsized impact on the same individuals and families already struggling in the American economy or that these disparities will have distinct neighborhood-level impacts.

To support Chicago-area housing and community development practitioners as they think through the need for housing and place-based interventions, the Institute for Housing Studies (IHS) created a new analysis to highlight the potential economic impacts of the COVID-19 crisis on households with workers in occupations most vulnerable to mass layoffs. The analysis adapts methodology and code developed by the NYU Furman Center to analyze conditions in Chicago and is distinct from work that focuses on the risks of essential workers. It classifies a core set of occupations that were likely to be most impacted by the initial wave of COVID-19-related mass layoffs and identifies households with at least one member working in a vulnerable occupation (1). IHS’s adapted analysis shows that in Chicago, renter households, particularly those that were lower-income and already cost-burdened, and workers of color, are more likely to be employed in occupations most vulnerable to significant disruption and layoffs due to COVID-19 and that there are distinct geographic patterns to these impacts.

Here’s what we know from our initial analysis (2):

This initial IHS analysis is in line with what others have reported nationally on the connection between at least the first wave of COVID-19 and certain impacts, but Chicago’s history of segregation and distinct geographic patterns of rental housing stock mean that these trends are not impacting the city evenly. Our data show that while renter households with likely impacted workers can be found in every Chicago neighborhood, they are particularly concentrated in communities of color on the south and west sides. Additionally, already cost-burdened at-risk renter households are concentrated in a small cluster of south side communities. Strong concentrations of at-risk households in communities of color illustrate the disproportionate impact of at-risk workers by race noted above, but preliminary analysis shows that disparities by race and ethnicity also exist in other areas of the city.

For example, the interactive map below shows that in south and west side submarkets, over half of renter households have at least one member employed in a likely impacted occupation. These areas have higher levels of at-risk workers such as those employed as cashiers, janitors/building cleaners, and cooks. Conversely, the Loop and Lincoln Park/Lakeview submarkets have smaller shares of potentially impacted renter households, with higher shares of workers employed in less at-risk occupations such as management analysts, lawyers/judges/magistrates/other judicial workers, and accountants and auditors (3). Figure 2 illustrates how these data look as numbers, not shares, and shows that the areas with the largest number of potentially-impacted renter households include Bronzeville/Hyde Park, Uptown/Rogers Park, and Humboldt Park/Garfield Park. In general, this pattern follows broader renter distributions across the city. For a statewide map of these patterns, click here.

(Zoom and search controls are on the bottom-left. Click on a submarket for additional information. For a full-page map, click here.)

Figure 2. Number of Renter Households that are in More Vulnerable and Less Vulnerable Occupations by Submarket, 2018 Figure 3. Share of Renter Households Working in a More Vulnerable Occupation that are Housing Cost Burdened, 2018

(Zoom and search controls are on the bottom-left. Click on a submarket for additional information. For a full-page map, click here.)

Figure 4. Share of Workers Employed in a More Vulnerable Occupation by Race and Ethnicity, 2018 While Chicago’s patterns of segregation mean that there are few communities within the city where all three major race and ethnic groups are significantly represented, we can see in some neighborhoods how disparities in potentially impacted workers may exacerbate existing inequities and housing market pressures. Previous IHS research identified a set of four northwest side submarkets that had experienced the most substantial recent losses of affordable rental housing. Figure 5 below shows that in three of these four areas, disparities between the share of potentially impacted white and Latinx workers are far wider than the city average. For example, in the Irving Park/Albany Park area, roughly 18 percent of white workers are employed in a more impacted occupation compared to over 47 percent of Latinx workers.

Figure 5. Share of White and Latinx Workers Employed in a More Vulnerable Occupation, 2018 This analysis highlights the risk that the COVID-19 related economic crisis will likely disproportionately impact workers of color and renter households, particularly already cost-burdened renter households and renter households that are low income. Geographically, these preliminary data show that communities of color and workers of color in neighborhoods already experiencing rental housing affordability challenges may be disproportionately impacted. Based on these geographic patterns the crisis may create new headwinds in some of the same communities that have just started to stabilize after the Great Recession and may exacerbate displacement pressure for households of color in gentrifying areas of the city.

While the nature of interventions to mitigate risk is evolving and there is a need for other data to highlight workers that may be unable to access unemployment benefits and other risks to the economy, these initial data on the potential impacts of COVID-19 can be used as a starting point to help frame conversations around the scale of interventions needed to stabilize the local rental market, protect renters, and identify communities of greatest need.

1. Includes individual workers in at-risk occupations such as cashiers, retail salespersons, janitors/building cleaners, cooks, waiters/waitresses, security guards/gaming surveillance officers, personal care aides, office clerks, construction laborers, maids/housekeeping cleaners. IHS used the classifications created by the NYU Furman Center and did not adjust classifications based on Illinois stay-at-home orders as the impact of these orders on individual industries are difficult to isolate in the data.

2. The classification of impacted industries is based on analyses by the NYU Furman Center which itself was based on work by the Brookings Institute and Moody’s Analytics. It is meant to capture industries most impacted by the immediate wave of COVID-19-related layoffs. As national and regional economic challenges deepen, it is very likely that more industries will be at risk of significant layoffs. The analysis only looks at households with at least one individual that is working. It excludes individuals who are non-wage earners, Individuals less than 16 years old, and individuals not in the labor force. This last group consists of those who last worked more than 5 years ago or never worked. In Chicago, 47 percent of the population falls into one of these categories, and 22.9 percent of households are composed entirely of individuals from one of the above categories. 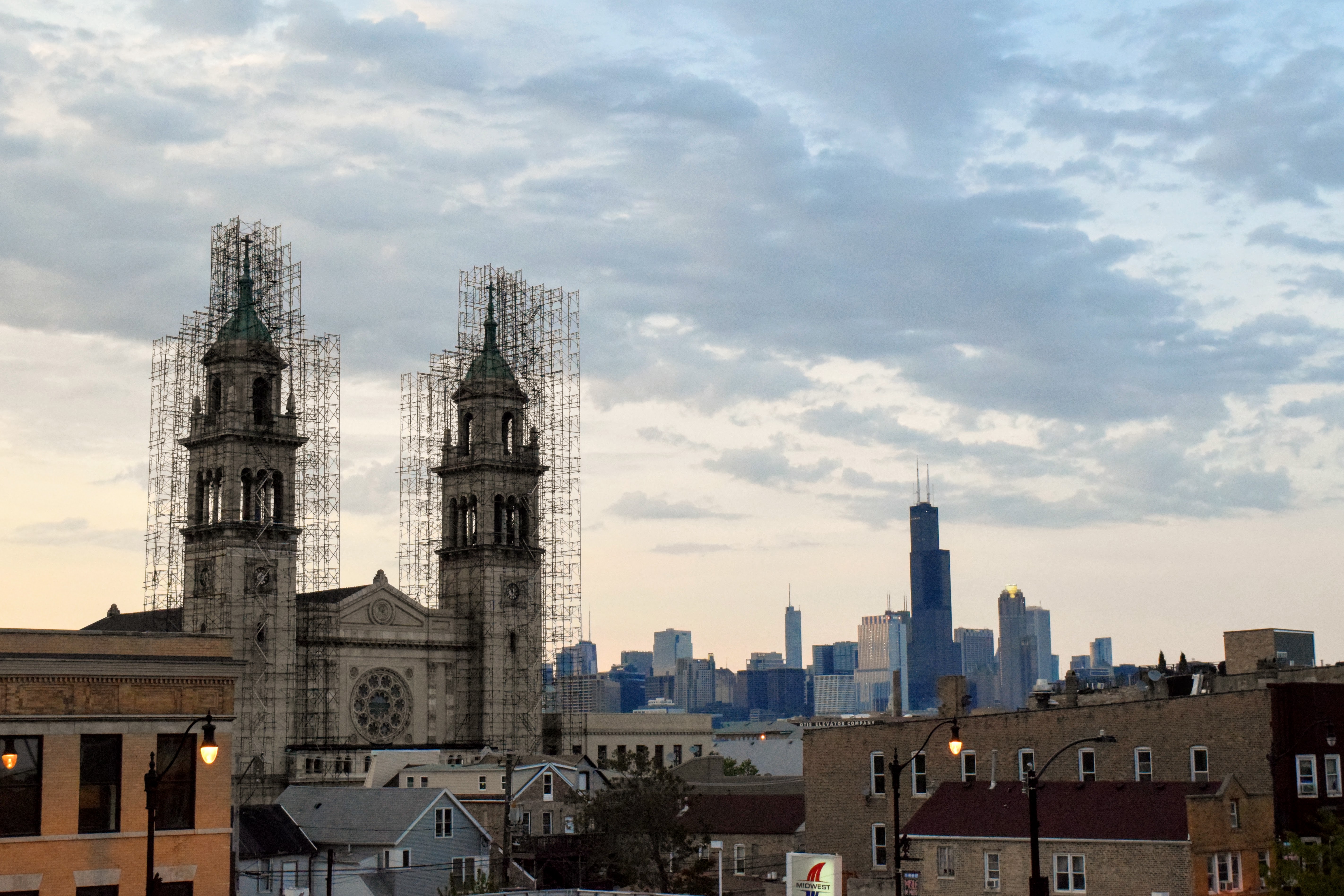