Cash or credit: The role of cash buyers in Cook County's housing market 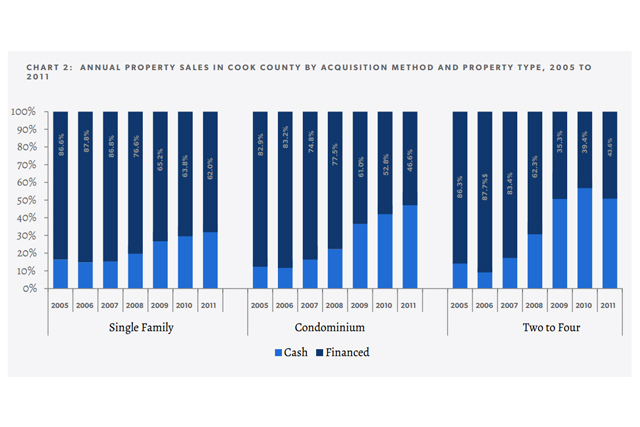 Following the collapse of the subprime mortgage market and the onset of the U.S. foreclosure and global financial crisis, Cook County’s housing market has been one of the weakest in the nation. This weakness has been caused by a consistent and growing supply of foreclosed properties entering the housing inventory at a time when both the demand for housing is weak and access to credit is limited. As a result, housing prices have declined dramatically, particularly in communities that have seen concentrated levels of foreclosure activity, while potential buyers interested in purchasing these properties are unable to get the financing they need to do so. However, these conditions also present opportunities for homebuyers who have cash on hand and for investors looking to take advantage of low prices and the growing demand for rental housing.

This analysis examines residential property sales activity in Cook County from 2005 to2011 and explores the role that cash buyers are playing in different segments of the County’s housing market. This analysis sets a baseline for future research into the importance of access to credit and the impact of investor activity on neighborhood recovery.

Download the Cash or Credit: The Role of Cash Buyers in Cook County's Housing Market Research Report or Fact Sheet.