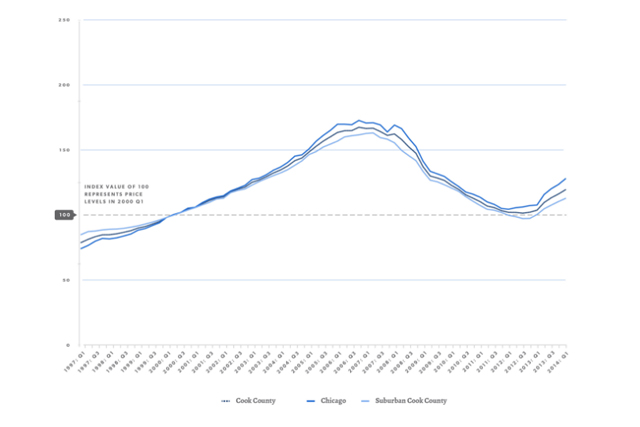 Single family house prices in Cook County continued to show improvement in the first quarter 2014, led by strong price growth in the City of Chicago. Prices in suburban Cook County also saw annual price increases, but grew at a slower rate than in the city. Areas heavily hit by foreclosure during the housing crisis showed the most significant increases. Despite positive recent price trends in these hard-hit neighborhoods, long-term house price levels in these areas still significantly lag those in other, less distressed parts of the county. Neighborhoods hardest hit by foreclosure saw the largest annual price increases. Figure 3 shows long-term price trends for Cook County neighborhoods segmented by the degree to which they have been impacted by foreclosure. It shows that while all areas continued to see improving price levels, high foreclosure areas saw the most significant recent gains. In these areas, prices increased by more than 30 percent year over year and by nearly 10 percent since last quarter. This is compared to areas with the lowest-levels of foreclosure distress where prices increased 15.5 percent year over year and 3 percent since the fourth quarter 2013. Although both the City of Chicago and suburban Cook County housing markets continue to show positive year-over-year increases in the first quarter of 2014, price growth is slower in suburban Cook County. The most foreclosure-distressed areas of the county continue to show significant price improvements, likely as a result of a clearing of distressed inventory and resales of previously foreclosure-distressed properties bought at lower values. However, price levels in these neighborhoods are 55 percent below peak and remain below levels recorded by the index since 1998 - indicating that these areas have a long road to full price recovery.

The First Quarter 2014 IHS Cook County House Price Index is calculated from data on single family properties with repeat sales from the first quarter of 1997 through the first quarter of 2014. This release of the Index focuses on quarterly price changes for single family homes and tracks the variation in price changes between areas that have experienced different levels of concentrated foreclosure activity throughout the housing crisis.

For a detailed description of how the IHS Cook County House Price Index is calculated, click here. For each release of the Index, tabular data is available for download. The numbers reported here are seasonally adjusted. For access to all downloadable materials, click the download link at the bottom of the page.