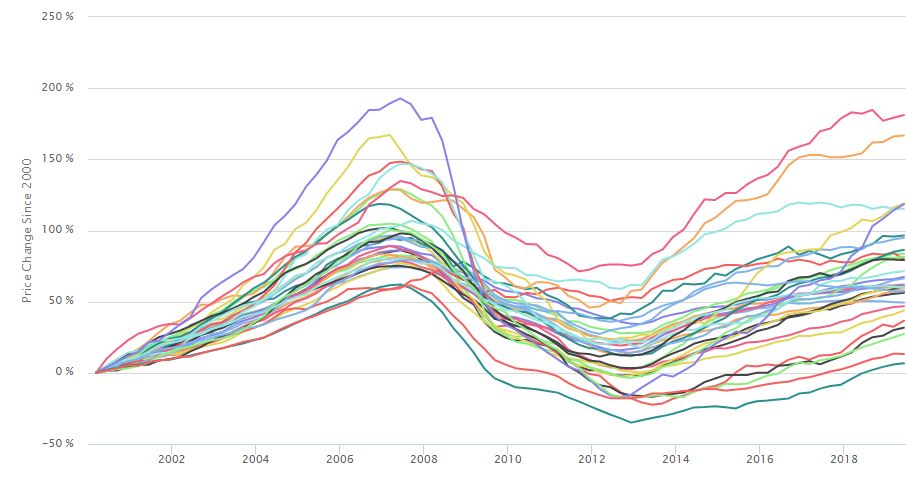 This update of the Institute for Housing Studies (IHS) Cook County House Price Index highlights changing prices for single-family homes through the second quarter of 2019 in 16 City of Chicago submarkets and 17 submarkets primarily in suburban Cook County. A detailed discussion of the Index is below. To view a full page interactive graph with a map and data for all submarkets go here. Underlying price index data can be found here.

Year over Year – This metric illustrates the short-term price trend and compares the current price level as of the second quarter of 2019 with the price level in the second quarter of 2018. Submarkets with large changes in price levels can be very different relative to each other, but each demonstrating recent increased demand. These include highly foreclosure-distressed areas where prices are starting to recover, as well as rapidly appreciating ‘hot’ markets. Historically, strong markets tend to have low but steady appreciation year over year. Interpreted in conjunction with other price trend indicators, year-over-year price changes can be helpful in identifying rebounding markets with stabilizing prices.

Recovery from Bottom – This metric measures the change in the price level from a submarket’s lowest point after the 2008 collapse of the housing market to the second quarter of 2019 and tracks the speed of recovery of single-family house prices. This indicator is an important measure for recent buyers who purchased properties near the bottom of the market and who are trying to understand the return on that investment. The indicator is also valuable for understanding where investment has been flowing since the bottoming-out of the market. This ‘recovery’ metric reflects recent demand for housing that could be driven by owner-occupants competing for a limited supply of for-sale housing in “hot” markets or investors competing for the dwindling supply of low-cost properties in more distressed markets. The difference in types of demand means the recovery metric should be interpreted in conjunction with other price trend data points.

Peak to Current – This metric measures the difference between a submarket’s peak price level at the height of the housing boom and the current price level as of the second quarter of 2019, and it captures the recovery of a neighborhood’s house prices towards previous price peak levels. Many neighborhoods that saw a substantial build-up in prices during the housing bubble experienced equally dramatic declines. While those price peaks were often inflated and unsustainable, recovery towards those peaks is an important benchmark for homeowners who bought their homes or obtained a mortgage from 2005 to 2007 when prices were at their highest.

Price trends since 2000 – This metric tracks the change in price levels from the first quarter of 2000 to the second quarter 2019 and measures long-term price trends. The variation in neighborhood price trends since 2000 is a key indicator of the impact the housing crisis and uneven housing recovery has had, not just on local housing markets, but also on long-term homeowners. Home equity is a key asset for both lower- and higher-income households, and increasing equity over time is one of the ways that both lower- and higher-income households build wealth. In areas where there has been limited long-term price appreciation, long-time owners benefit less from increasing home equity compared to long-term owners in areas with significant appreciation.