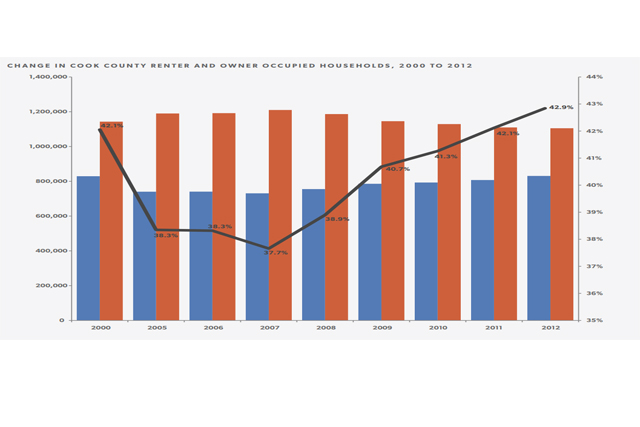 In light of the continued acute need for affordable rental housing in Cook County, the latest report from IHS examines a key challenge to maintaining and increasing the supply of affordable rental units: access to credit for multifamily properties in the county's lower-income communities. This report builds on the findings from the 2013 State of Rental Housing in Cook County using mortgage data released in October of 2014. The reports findings are summarized below. The complete report, which includes multiple charts, a map, methodology, and full appendices with data for each graphic, is also available for download at the bottom of this page.

Cook County's housing market continues to show evidence of sustained rising rental demand and a persistent gap in access to affordable rental housing. In 2012, more than 176,000 additional units were needed to meet Cook County's existing demand for affordable rental housing. This mismatch between the demand for and the supply of affordable housing helps to explain why, as of 2012, roughly 51 percent of all renter households in the county were housing-cost burdened, meaning they spent more than 30 percent of their income on housing.

While government assistance with housing costs is available for some very low-income households, only one in four renter households who seek this type of assistance receive it, leaving the vast majority of renter households across the income spectrum to compete for unsubsidized, private-market housing that they can afford.

In Cook County, as is true nationally, a substantial portion of affordable rental housing is found in unsubsidized, smaller, and older rental buildings often located in low- and moderate-income neighborhoods. Small rental buildings with between five and 49 units account for 76 percent of all of Cook County's multifamily rental units and as figure 1 below shows, these small multifamily buildings represent 80 and 83 percent of the multifamily rental units in the county's low- and moderate-income neighborhoods, respectively. There are significant challenges to the preservation of affordable rental units in these neighborhoods, however. Population and demographic shifts have led to reduced demand for housing units in many of these same communities, and the recent housing and economic crisis left the multifamily stock in these areas foreclosure-distressed, leading to increased levels of vacancy and blight.

Given the unmet need for affordable housing in every Cook County neighborhood, access to adequate credit is important to prevent the further deterioration and loss of units in these older buildings. Exacerbating the market-level challenges for these properties is that small rental buildings in low- and moderate-income neighborhoods require smaller-sized loans that have become increasingly more difficult to access, and the types of lenders providing credit to these buildings have either left the market or shifted to making larger loans.

The latest report from IHS examines multifamily lending trends in Cook County between 2005 and 2013 with a focus on the flow of mortgage credit to multifamily buildings in the county’s low- and moderate-income neighborhoods. It finds that multifamily lending levels have been slow to recover in these communities since the housing crisis, and that recent gains in lending to five-plus-unit multifamily buildings have been largely concentrated in the county’s middle- and upper-income neighborhoods.

This analysis also finds a dramatic decline in the availability of smaller loans of less than one million dollars, a contributing factor to which was a decline in the activity of smaller-sized community banks who historically played an important role in making smaller loans to low- and moderate-income neighborhoods. These findings raise concerns not only about potentially unmet credit needs for small multifamily buildings in Cook County’s lower-income communities critical to an already limited supply of affordable rental housing in the county, but also add evidence to the growing policy challenge of an uneven and bifurcated recovery in Cook County’s housing market.